Things have not been going swimmingly for SeaWorld Entertainment this past decade. A myriad of deaths and injuries at the company’s various facilities over the years were unveiled and sparked the making of Blackfish, the 2013 film documenting the story of the captive show orca Tilikum. Guilty of neglecting to care for the well-being of its employees and animals in the eyes of both the public and the courts, SeaWorld is ending its orca shows and breeding program, and struggling to reverse its losses in revenue and attendance by doing everything from building new rides and new parks to changing over its top brass, including CEO Joel Manby.

While SeaWorld tries to rescue itself and repair its public image in a world that is much more critical today of how and when animal entertainment is acceptable, the company has its own rescue teams dedicated to healing, understanding, and conserving marine species. Since the inception of their rescue work over fifty years ago, the teams (each associated with different company parks) have rescued and rehabilitated nearly 32,000 animals. And because their facilities make them uniquely capable of caring for many of these marine animals, which has also given them the expertise that comes with this level of access, they are able to carry out ongoing research studies, often in partnership with other scientists from organizations such as the National Fish and Wildlife Foundation and the Hubbs-SeaWorld Research Institute.

While most of SeaWorld’s rescues are birds (about 20,000 to date) and pinnipeds (approximately 8,000), SeaWorld also rescues sea turtles and reptiles, cetaceans, otters, manatees, and various other mammals. If you are fortunate enough to live near or visit where one of the rescue teams works, you may have the opportunity to see them at work rescuing animals in need or releasing them back into the wild. Each animal that is treated is tagged for recordkeeping and for reference in the event of a future treatment. 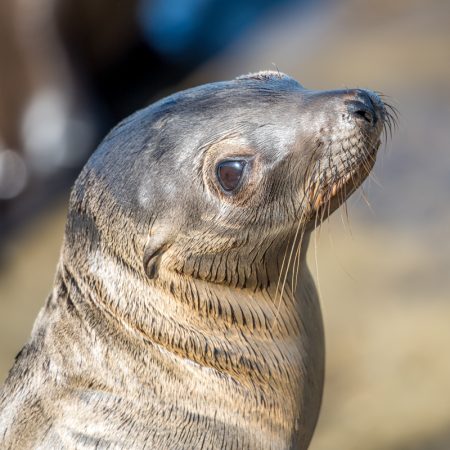 In La Jolla, California, the San Diego team can often be seen working with California sea lions (Zalophus californianus). In recent years, an Unusual Mortality Event (UME), likely due to reduced availability of sea lion prey, has kept the team and other members of the NOAA West Coast Region Stranding Network especially busy rescuing and rehabilitating malnourished sea lion pups. Domoic acid toxicosis and shark bites are among the other natural causes for illness and injury that prompt SeaWorld and other rescue organizations to regularly step in to provide care and rehabilitation for sea lions and other animals.

There are times when animals need to be taken in for reasons that are not so obvious as a shark bite or visible signs of malnourishment. One California sea lion pup (tagged W2461) was separated from her mother and was under the care of the rescue team before being released. Unfortunately, she remained isolated from other sea lions, which prompted additional care from the team as healthy sea lions are normally very social. 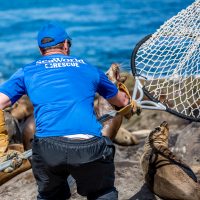 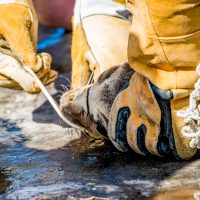 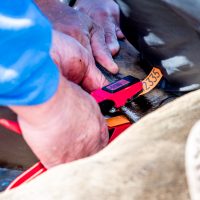 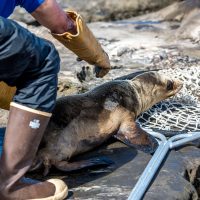 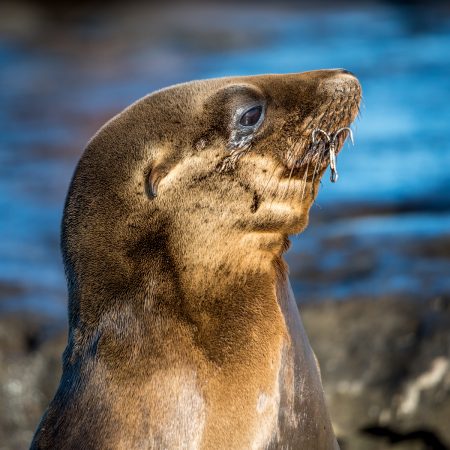 California sea lion with fishing hook on right side of mouth. © 2018 Lisa Marun

In addition to natural illnesses and injuries, there are many dangers to sea life that originate from human actions; pollution and shipping and fishing activities all pose serious threats. The SeaWorld team recently responded to a call about a sea lion with an elastic band around its mouth that, with time, would have led to malnourishment since the sea lion could not eat. With skill and years of experience behind them, two team members captured the sea lion and removed the band before tagging (#W2335) and releasing it.

While visitors to coastal La Jolla enjoy being in close proximity to sea life, this nearness increases animals’ exposure to potentially dangerous human activities. It is not unusual, for example, for SeaWorld rescue teams to come to the aid of sea lions with fishing hooks in their mouths. Fortunately, as with W2335, above, these animals can often be helped and released on the spot.

To view images of California sea lions, visit the Water and Marine Life page. To purchase prints, please contact me with a description of the images you would like, or your request for a specific type of image that you are looking for in this series.