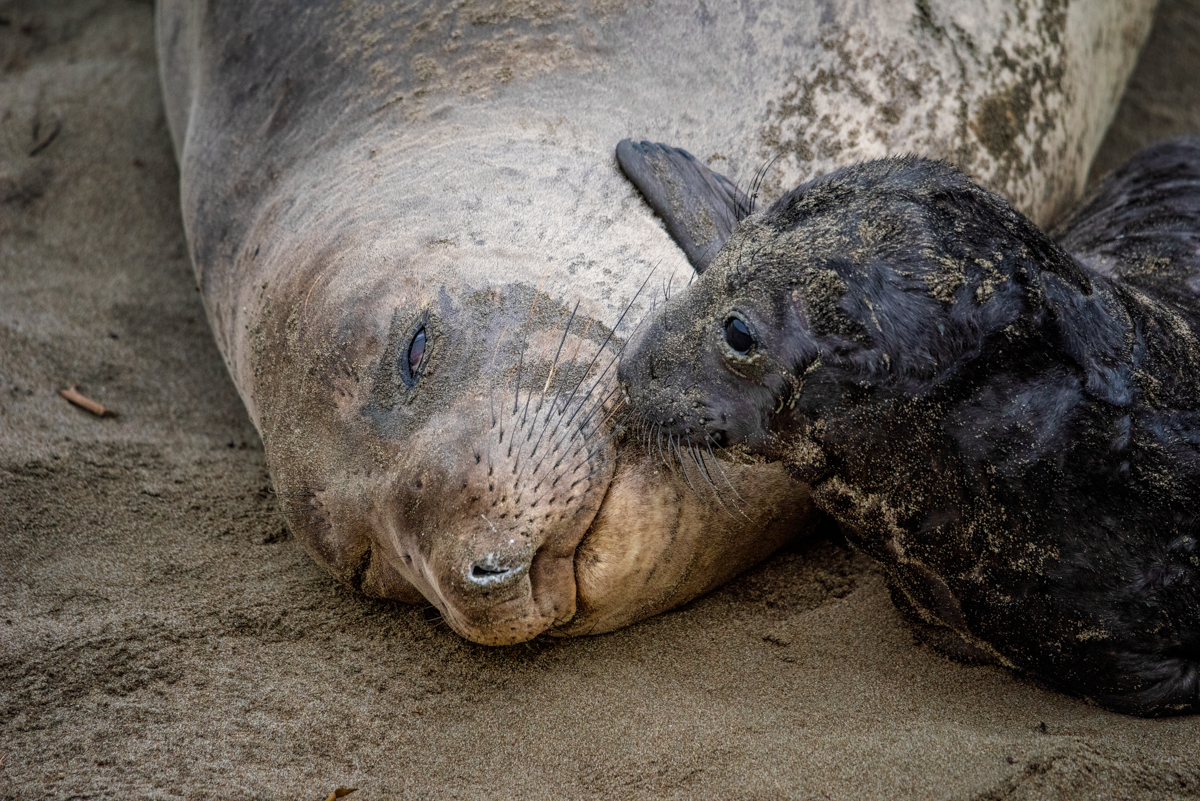 Up and down the California coast, seals and sea lions are birthing at select beach locations as they do every winter. The largest of these pinnipeds in North America are the northern elephant seals (Mirounga angustirostris). According to Friends of the Elephant Seal, females mature to a weight of about 1000 to 2000 pounds and length of nine to twelve feet. The females are no match for the males, though, who grow to be between fourteen and sixteen feet long, and can weigh as much as 5000 pounds. In addition to their large bodies, elephant seals are famous for the large proboscis (nose resembling an elephant’s trunk) that the males sport. This secondary sexual characteristic also allows males to more efficiently use their noses as rebreathers. Given that elephant seals do not eat or drink water for weeks or months at a time while on land, having a rebreather serves the important function of allowing elephant seals to reabsorb moisture from their exhalations. 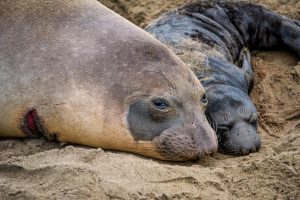 From the waters of Alaska to Baja California, northern elephant seals travel up to 21,000 miles in two long-distance migrations per year. During their long months out at sea, they are almost exclusively underwater diving for food to depths of up to 5000 feet. They only need to come up for air for a few minutes per hour, thanks to some uniquely specialized adaptations. They can completely deflate their lungs, easing deep descents and preventing the bends. Having twice the blood volume, 50% more red blood cells than land mammals their size, and a healthy supply of myoglobin (which stores oxygen) in their muscles means that their blood, rather than their lungs, are their oxygen source. During dives, they also slow their heart rate by 60% and divert blood flow from their extremities to vital organs to reduce their oxygen requirements.

Northern elephant seals eat a varied diet including fish, squid, shark, and octopus. Females tend to dive deeper and farther out at sea, while males hug closer to the continental shelf. Great white sharks and orca both prey on elephant seals, with males being more at risk to orca attacks due to their frequenting the continental shelf and females being more susceptible to white sharks in the deeper waters. 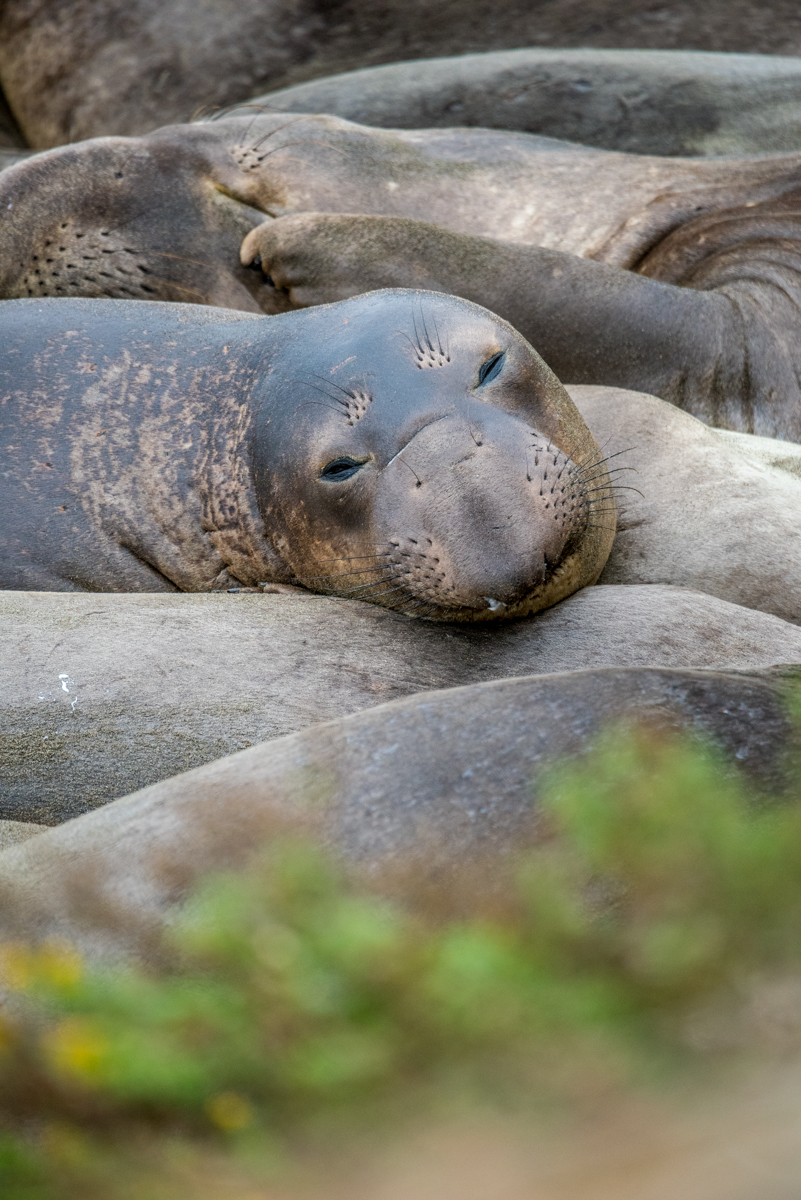 Although northern elephant seals spend most of their time in the water, males, females, and juveniles each visit rookeries between Baja California and Point Reyes at different times so that some seals can be seen on land throughout the year. Populations generally peak once most births have occurred in late January, as juveniles and adult females molt in early May, and during the fall juvenile haul-out in October.

The winter months may be the most active time for the seals on land: females give birth, males fight for dominance, and adults mate before heading back out to sea. Otherwise, since northern elephant seals always fast while on land, they mainly lounge about to conserve energy.

Life begins on land for northern elephant seals. Females give birth to 70-pound black-furred pups in December and January. After four weeks of their mothers’ high-fat milk, the 270-pound pups’ fur is shed to reveal a shimmery gray coat. At about this time, newborns’ mothers will mate and head out to sea, thereby leaving the newly-weaned pups to teach themselves how to swim and to tough out the first of their many fasts on land. Around April, the pups will make their first ocean voyage and brave the risky waters filled with hungry sharks, orcas, sea lions, and harbor seals.

Like all mammals, elephant seals must replace old skin and hair. They do this once per year, in late spring for juveniles and females and in the summer months for males. (The pups do not molt again their first year, but they do return to land for the fall haul-out with adolescents.) Since elephant seals essentially cut off circulation to their outer skin layers during their deep dives at sea, they must remain on land during their molts.

Where to Visit Northern Elephant Seals

After being hunted for their blubber (used for lamp oil) nearly to the brink of extinction, protective measures have brought northern elephant seal numbers back up to about 160,000 from a low of approximately 100 in 1900. While most rookeries are on islands, a drive along the California coast provides the opportunity to see the seals at three locations.

Elephant Seal Overlook at Point Reyes National Seashore in Marin County has seen the return of elephant seals since the 1970s. Winter Wildlife Docents are present daily to answer visitors’ questions. A little further down the coast, Año Nuevo State Park in San Mateo County offers daily access to the preserve where elephant seals are located during breeding season via a three- to four-mile hike for those with advanced reservations. And in San Luis Obispo County, just north of Hearst Castle, the non-profit organization Friends of the Elephant Seal operates in conjunction with California State Parks to make the Piedras Blancas rookery an easily accessible and educational viewing opportunity for the public. Visit the websites for each of these rookeries to learn more about when and where to go, as well as other wildlife viewing opportunities that can be expected at each location. 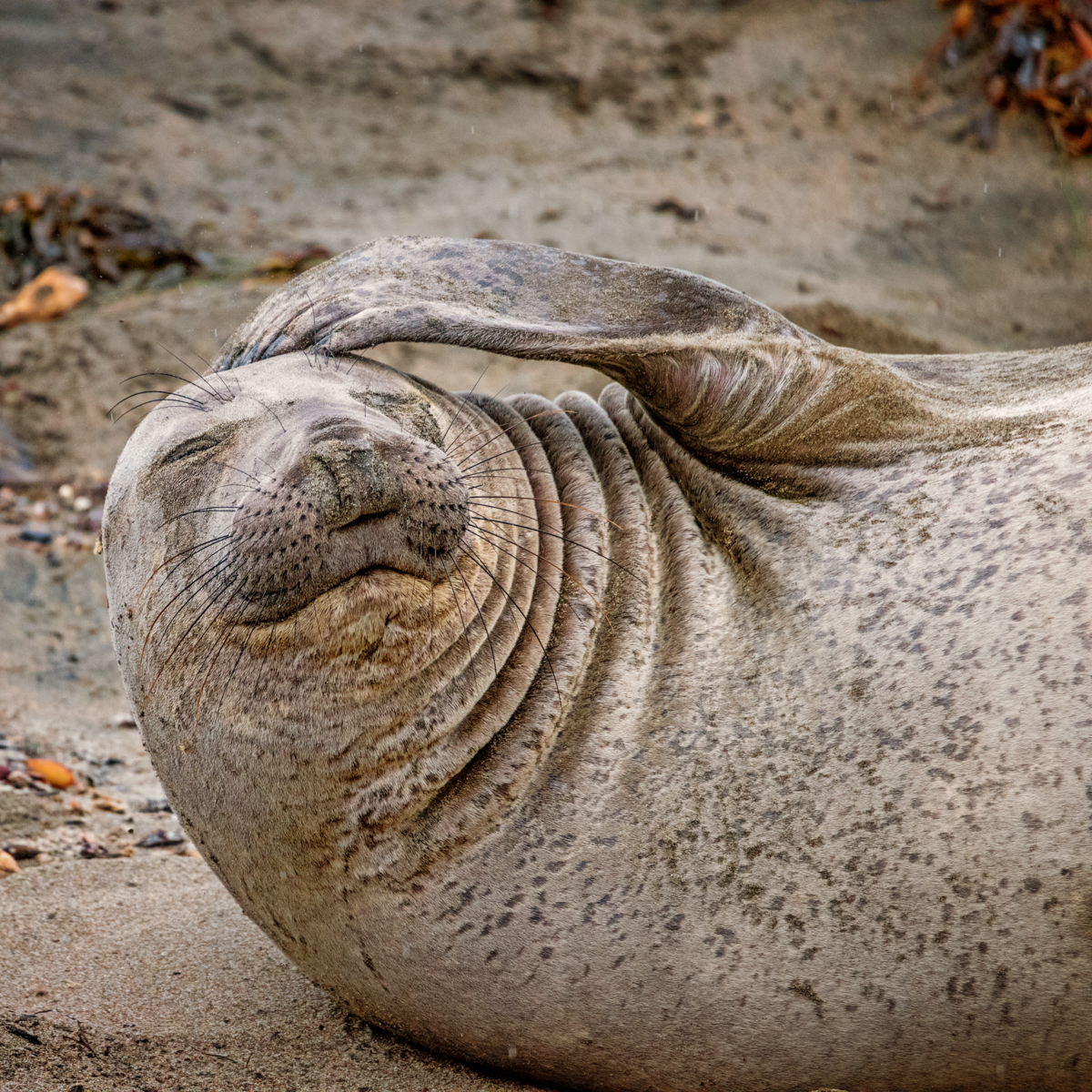 To view these and more images of northern elephant seals, visit the Water and Marine Life page. To purchase prints, please contact me with a description of the images you would like, or your request for a specific type of image that you are looking for in this series.